We, Steffie and Sven, and obviously in the past the founder of our kennel, Max, have been active in the “dog business” for dozens of years. A hobby absorbing all our leisure time. For Steffie it all started with sporting-dogs and for Max everything began in 1952. He started with Bouviers de Flandres and German Shepherds, but soon he began to interest himself in the French Bulldog. You should realize that in those early years, the American Staffordshire Terrier was a totally unknown breed in the Netherlands. Unfortunately, I should say! How we wanted to have started even earlier with this spectacular “all American dog”.

And it all really got serious in 1963 when “The Big Ones” kennel was established. A kennel of French Bulldogs. Great successes were obtained at dog shows, resulting in various champions. The atmosphere of the show ring was tasted once and it tasted so good that it made him to want more! A provisional highlight was the European championship with the male dog Duco van ’s-Gravenmade. A dog that was used to winning, he already obtained the titles of: International Champion, Belgian Champion, Dutch Champion, Luxemburg Champion and French Champion. A big competitor in those early years was “sly old dog” Prince Von Ratibor und Corvey. A wealthy German breeder, having much experience and knowledge. 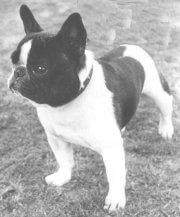 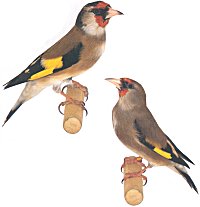 In connection to the “law studies” of Max, with notary as field of study, it was out of necessity that breeding and training dogs were put on a lower level. However, the tendency was set and for him it was very clear that, as soon as time permitted, he should, or better, he had to “enter” the ring again! The sooner the better!

His second hobby, birds, was not as time-consuming as the dogs. From his twelfth birthday onwards he had a passion for breeding and showing birds. Even here success was bound to come soon. The provincial and Dutch Championships were obtained more than once. Knowledge and patience were finally awarded and resulted in the much desired title of “Wood-birds World Champion” in 1992 and 1993 and this even in the heaviest class, namely Major Goldfinches and mutation Siskins. Victory was gained with so-called Stocks of own breed. That is to say: four birds bred of a line as closely looking alike as possible. As far as birds were concerned, a goal had been reached instinctively. Higher than that was impossible. Nowadays we are still enjoying the birds and particularly their singing. There are still eight large aviaries in our garden.

Why this explanation you may ask yourself as a right-minded lover of dogs. Well, it shows that we are lovers of animals in general and take great pleasure in breeding a good breeding product. Preferably, a breeding product of our own and we can proudly say that we have successfully succeeded in that, with birds as well as with our dogs.

The urge to achieve this all is probably a virus which Steffie and Max were infected with. For whereas he was busy with the birds, Steffie was active as a teacher of show dancing. Her approach resulted in no less than eight European champions in 1987 in Frankfurt, the cradle of the world of dancing. Having gained victories in the lion’s den! It was, however, with pain in her heart that she had to make a choice. The dogs, which were plentiful present again, required too much time. The dogs came first. 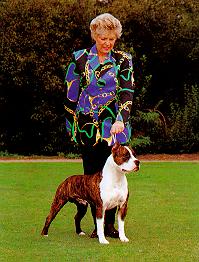 Life wouldn’t be the same without our AmStaffs

By a powerful and resolute approach, aiming at the highest possible, a plan of action was drawn up. Within the foreseeable future, this yielded its benefits. Also great national and international successes were, and are, obtained with the AmStaffs. With imported dogs and with our own breed. Dogs, which we bred and sold ourselves, obtained great successes and championships in the Netherlands as well as other parts of the world. Looking back, we can say that we have clearly chosen for the dogs.
A right choice? We leave the conclusion up to you. For us it is a settled matter.
The question “Why AmStaffs then?”, forces itself on us. The answer is “Life wouldn’t be the same without our AmStaffs”.
We shall go into this matter further in the brief kennel description and it will then become clear to you.