The history of the American Staffordshire Terrier in the Netherlands

The American Staffordshire Terrier originally goes back to two ancestors, namely crossings between the Old English Bulldog and the various English terrier breeds of that time, such as for example the fox terrier. At the time, in England, the breeders mainly looked at the “sporty” performance of these dogs. The fact that these crosses excelled in strength, stamina, endurance, intelligence. Besides that, they were extremely loyal to their owner, which was very important. Indeed, suddenly there was a dog that was very useful for various kinds of dogfights.

Step-by-step, mainly terriers and bull-like dogs were used for breeding. Which resulted in a dog in about 1860 which we can compare nowadays with the current Staffordshire Bull Terriers. After the American Civil War, which ended in 1865, many poor workers from England, Ireland and Scotland immigrated to the United States in search for a better life. Of course, their favourite four-legged friends travelled across the water with them. These dogs were known in America under the names Pit Bull Terrier, American Bull Terrier, American Pit Bull Terrier and later the Yankee Terrier. 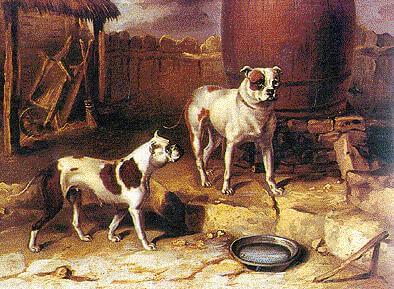 The American Staffordshire terrier we know nowadays is loyal family dog. A dog, we adore because of his happy nature and his kindness to human beings. Besides that, his noble and gentle character towards kids is outstanding.

The first American Staffordshire terrier imported and registered in the Netherlands was Sun Tzu of Deofol, a beautiful white/red male dog. This was in 1983.

Actually, Sun Tzu was the grandfather of our first Old Hickory Show AmStaff, General Grand of Deofol. Henk Stelwagen owned Sun Tzu and was the breeder of our “ Grandy”. Sun Tzu was the first AmStaff I saw in my life, and I can still picture him as if it was yesterday.

Shortly after the first introduction of the AmStaff in Holland the American Staffordshire terrier club ASTCH was founded. We go back to 1985. The Raad van Beheer, which is the official Kennelclub from Holland, recognized our breed in 1992.

With the growing popularity of our breed, unfortunately the (negative) interest of the media grew as well. Which resulted in the fact that there was a danger that our breed would become interesting for the “wrong audience”. Just like nowadays, at that time, the media loved to publish articles with our AmStaff as head subject. You can imagine that 9 out of 10 articles where negative. Mainly to rubbish our breed.

This negativity unfortunately never disappeared. In the earlier days, Max was often asked to give information, or interviews, regarding the AmStaff. There where the press always tried to compare the AmStaff with the Pitbull, Max always indicated firmly that we are talking about two completely different breeds. He was a proud defender of our breed.

From the start the ASTCH separated themselves from dogfighting and the pitbull community. In those days, the ASTCH required a signed document to declare that the new candidate member was not involved in any way with dogfighting.
In the meantime, the American Staffordshire terrier has become an immense popular breed in Holland. The negative side effect of this is that we see an uncontrolled trade with these dogs.

It is worrying us that there are still people who are prepared to acquire an American Staffordshire terrier without doing their homework first. This without reading or getting to know our breed before, and subsequently buy, unobtrusive, a dog.

You see them offered everywhere, even on portals like Ebay. As you can imagine those so called breeders are not recognized by the FCI. I am pretty sure the majority does not even know what the FCI even stands for. It would not surprise you that those (parent) animals have never had any health checks or character tests.

It is a shame… mainly because there are now enough recognized breeders in Holland. Breeders who really care about the dogs and their health.

One of Max popular phrases was “The dragon is appearing again” It’s almost impossible to translate this phrase into proper English, but it means that it is a returning cycle of “mess”. So called breeders look only at numbers and the word quality does not even appear in their vocabulary. Nobody, not even a decent legislation, can change this tendency. A small group of people and breeders with the right attitude has to “fight” against a fast growing, larger group with the wrong attitude.

How long this can continue is a question without answer.