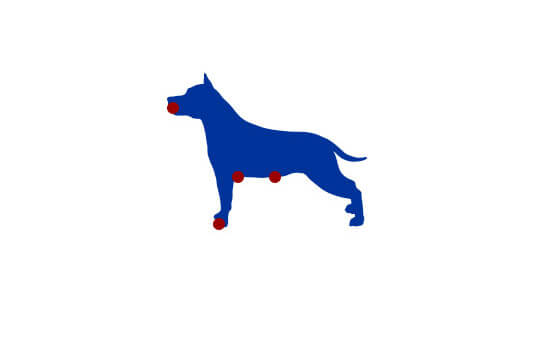 This is probably the most common allergy that occurs with the American Staffordshire Terrier. The symptoms are small red spots, usually on the tummy of the dog, and in the armpits of the dog. It can be a seasonal problem (usually in spring). Most of the AmStaffs won´t be affected by this problem when they get to a later age. This will be as soon as they have built up enough resistance. The dog will also suffer little to no trouble from this. Aggressive treatments with antibiotics or cortisones, for example, do more evil than good in our opinion. Only in severe cases is it will be necessary to intervene with medications.

Food allergy or food intolerance is like a dog hypersensitive to a particular ingredient in the. In most cases this can be a certain protein such as beef, chicken or wheat gluten.

Often these terms are used together in the same phrase but despite the complaints can be equal, we are talking here about two different issues.

With a food allergy, the body exhibits a hypersensitivity reaction that is activated by the immune system. Hereby, histamine can be released by the body that causes the symptoms of an allergy.

With a food intolerance, the body shows symptoms of hypersensitivity, but this does not involve the immune system of the dog. Intolerance often involves multiple vague symptoms, while the symptoms of an allergy are usually direct and clear.

Hypo allergen food can be a first step in the treatment of an allergy, but this food does not eliminate the cereals and corn. In this food, the proteins have been artificially broken down, which makes them for the dog’s body no longer recognizable. The danger of this method is that these proteins travel through the body like free radicals, which can give the dog an increased chance of tumours.

Another step is the elimination diet, this is a test diet that contains only of foods that the dog has never had before this to minimize the risk of an allergic reaction. An elimination diet is based on one source of protein (and possibly one carbohydrate source) This is the most reliable method of determining a food allergy. This because the chance is minimized that the dog will react on a certain ingredient. When giving an elimination diet there are two options, a self-prepared food or a commercial hypoallergenic food bought in the shop.

Before starting the treatment with the elimination diet, the secondary infections must be treated first. If you don’t do this it makes it more difficult to observe if there is a positive response to the diet. While following this diet, the dog must eat nothing else but this food. When the issues have been significantly improved or even disappeared after the diet, one can go to ‘provoke’. This means that a single ingredient is added every time, slowly, to the dog’s menu (obviously keeping a note of what the dog has had!) And you monitor closely if the complaints come back.

Probably 100% of all dogs are infected with this mite which is present in the skin. The vast majority of dogs have no complaints, but if a dog has complaints, the problem can be present itself in two ways: Locally or generalized.

Demodex is transferred from the mother dog to the pups, and this in the first days after giving birth. Here, intensive physical contact is needed. The complaints in young dogs are often seen in the areas where the pup has had the most contact with the mother when drinking milk: this will be around the mouth, the eyes and the top of their legs, especially their forelegs.

With local Demodex, we usually see the symptoms appear for the first time if the dog is under 1 to 1.5 years old. The majority of the problems occur with 3-6-month-old puppies. With this form of Demodex , 90% of patients have a good prognosis. In 30% -90% of dogs, the problem will resolve within a period of 2 months, but for some it may take longer. With 10% of the patients, the complaints are actually expanding over time. Factors that can play a role in the occurrence of complaints due to the Demodex myth are: other parasites, stress or a drug treatment, hormone change (eg having the period) or poor nutrition.

Abnormalities that can be seen in the skin are redness, pigmentation and skin flakes.

In generalized Demodex, we see that the complaints are spread over more than 50% of the skin or on their 4 legs. The prognosis is less good than with local Demodex, because it requires a much longer period in which the dog needs to be treated. In this second Demodex there are two varieties to distinguish: the juvenile form and the mature form.

The juvenile form develops at an age younger than 1-1.5 years. In a mild infection, there is a fairly good prognosis when treated, we see that some dogs are cured by themselves. However, if there is a nasty inflammation of the skin due to this Demodex mite, the prognosis is somewhat less good.

The mature form of Demodex occurs at the age between 2 and 4 years old. The prognosis is less good than in the juvenile form.

We recommend once again to give importance to a well-balanced diet and in special cases don´t shy away of giving your American Staffordshire terrier special nutritional food supplements.